An email and SMTP testing tool with API for developers

Based on the "Email" category.
Alternatively, view mailpit alternatives based on common mentions on social networks and blogs.

Clean code begins in your IDE with SonarLint

Up your coding game and discover issues early. SonarLint is a free plugin that helps you find & fix bugs and security issues from the moment you start writing code. Install from your favorite IDE marketplace today.
Promo www.sonarlint.org

Do you think we are missing an alternative of Mailpit or a related project?

Mailpit is a multi-platform email testing tool for developers.

It acts as both an SMTP server, and provides a web interface to view all captured emails. 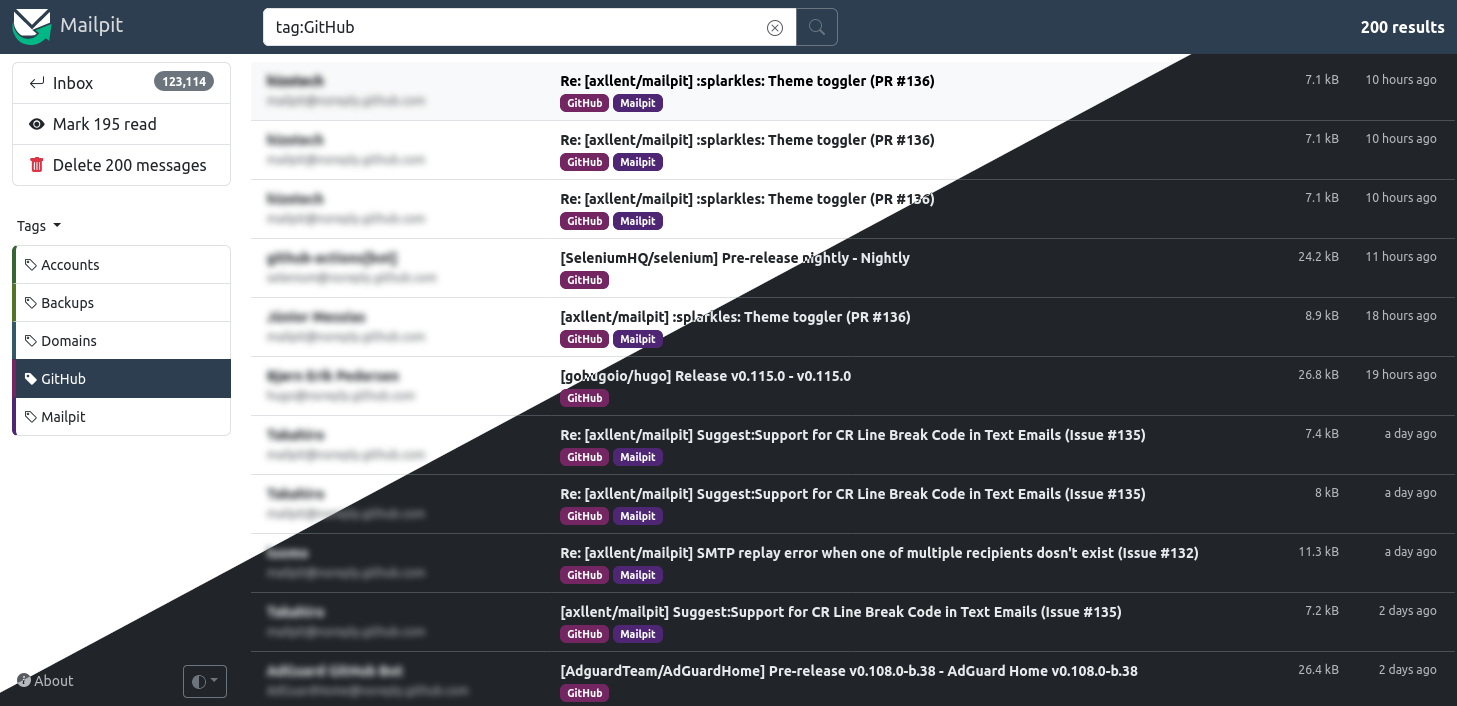 Linux & Mac users can install it directly to /usr/local/bin/mailpit with:

Or download a pre-built binary in the releases. The mailpit can be placed in your $PATH, or simply run as ./mailpit. See mailpit -h for options, or see the wiki for additional information.

There are several different options available:

You can use mailpit sendmail as your sendmail configuration in php.ini:

If Mailpit is found on the same host as sendmail, you can symlink the Mailpit binary to sendmail, eg: ln -s /usr/local/bin/mailpit /usr/sbin/sendmail (only if Mailpit is running on default 1025 port).

You can use your default system sendmail binary to route directly to port 1025 (configurable) by calling /usr/sbin/sendmail -S localhost:1025.

You can build a Mailpit-specific sendmail binary from source (see building from source).

I had been using MailHog for a few years to intercept and test emails generated from several projects. MailHog has a number of severe performance issues, many of the modules are horribly out of date, and other than a few accepted MRs, it is not actively developed.

Initially I started trying to upgrade a fork of MailHog (both the UI as well as the HTTP server & API), but soon discovered that it is (with all due respect) very poorly designed. It is over-engineered (split over 9 separate projects) and has too many unnecessary features for my purpose. It performs exceptionally poorly when dealing with large amounts of emails or processing any email with an attachment (a single email with a 3MB attachment can take over a minute to ingest). The API also transmits a lot of duplicate and unnecessary data on every message request for all web calls, and there is no HTTP compression.

In order to improve it I felt it needed to be completely rewritten, and so Mailpit was born.